The Missouri Lottery is launching its second $30 Scratchers ticket, and it’s BIG!  The "$300 Million Cash Explosion®" ticket offers more than $300 million in prizes and will instantly award prizes of up to $10 million.  In fact, there are 15 prizes from $1 million to $10 million!

That’s not all! Enter your "$300 Million Cash Explosion®" Scratchers tickets into the "second-chance promotion for more chances to win, including a $1 million prize!

*Average chances may vary from game to game due to the variance in prize structures. Overall, Scratchers games generally have average chances of winning of 1 in 4. However, this does not mean that every fourth ticket will be a winner, as winning tickets are printed at random.

Enter tickets for a chance to win $1 million cash!
Details 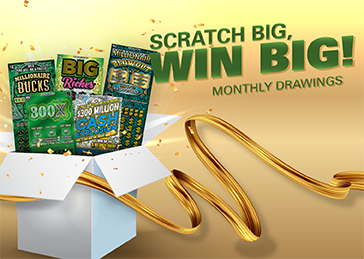 *Unclaimed prizes, including top prizes, are subject to the number of tickets distributed, sold and redeemed. Any of the prizes listed may have already been purchased, but not yet redeemed. A game may be closed due to performance, new game starts and seasonality.

*Second-chance promotional prizes (including cars, trips, etc.) are not included in "Total Prizes" or "Unclaimed Prizes" columns above.

The information on this page is updated daily.